It's all gone a little crazy

Ok, so my blogging attempts are about as frequent as my diary keeping when I was a teenager.

I've been popping down to the lottie whenever rain/time has permitted, mainly to water the tomatoes and aubergines in the greenhouse if it's raining, or to weed and plant stuff if it's not( I won't say if it's dry, as the plot is water logged and any digging is accompanied by squelches as the fork is moved around in the soil).

Some of the vegetables are growing much more rapidly than I expected. Psb for example, I planted this in early May, it's now flowering - 6 months before it's supposed to. Not that I'm complaining cos I love the stuff and would have spent 6 months looking longingly at it waiting for the flower buds to appear. 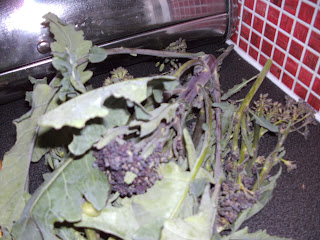 Similarly, but only 3 months early, is the swede that I planted at the same time as the psb. Now, many people at the lottie have said that swede won't grow there, but I took a tip from someone who successfully grew them last year and started them on in pots. I have been watching them closely, as I do with the veg that I particularly love. The foliage was particularly luxuriant, and about a month ago I noticed the first signs of the purple shoulders emerging through the soil. Yesterday I gave in and dug one up. It was about the size of a ...swede...I can't think of anything of the same size, a ball that elderly folk bowl with outside in greens, is about it. We had it mashed with butter and a little black pepper. YUM, YUM, YUM. 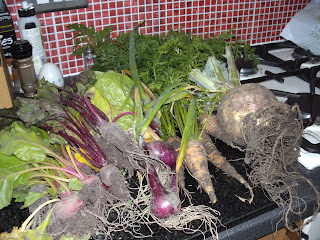 You can see it in the above photo, along with some carrots, a little gem & onions. There are also a handful of baby beet, which I am going to turn into a tarte tatin a la HFW in  hisVeg Everyday cook book.

There is also the start of what might be (hopefully) a bumper crop of broad beans. We've already had a few from them but now they seem to be starting in earnest. Here's what I picked yesterday. I've been dying to try out the broad bean bruschetta from the same book. 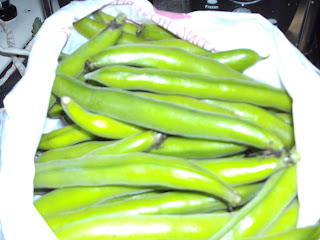 Finally, a view of more or less the whole plot to compare last year with: 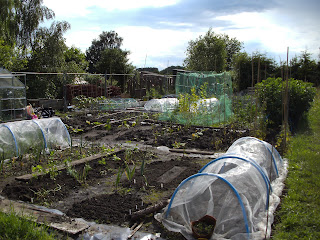 Damn, just realised I don't have any photos of last July stored on the laptop I'm writing this on. Needless to say it didn't look like this!

Posted by Whole Lotta Lottie at 10:01

Whole Lotta Lottie
I love gardening. I also love my free ranging ex batt chickens. I gave up growing veg at home cos the chickens deserved to be able to wander throughout the whole garden and there wasn't room for both. So I put my name down on the waiting list for an allotment. This is the story of what happened when I finally got a whole lotta lottie...